In its Fifth Assessment Report,  the Intergovernmental Panel on Climate Change concluded: “It is extremely likely that human influence has been the dominant cause of the observed warming since the mid-20th century.” Skeptical Science, a website dedicating to explaining “what peer reviewed science has to say about global warming”, has launched an innovative project to demonstrate this near total consensus among scientists that climate change is almost certainly caused by human activities.

On the site “97 Hours of Consensus“, statements from 97 of the world’s top climate scientists will be posted every 60 minutes. 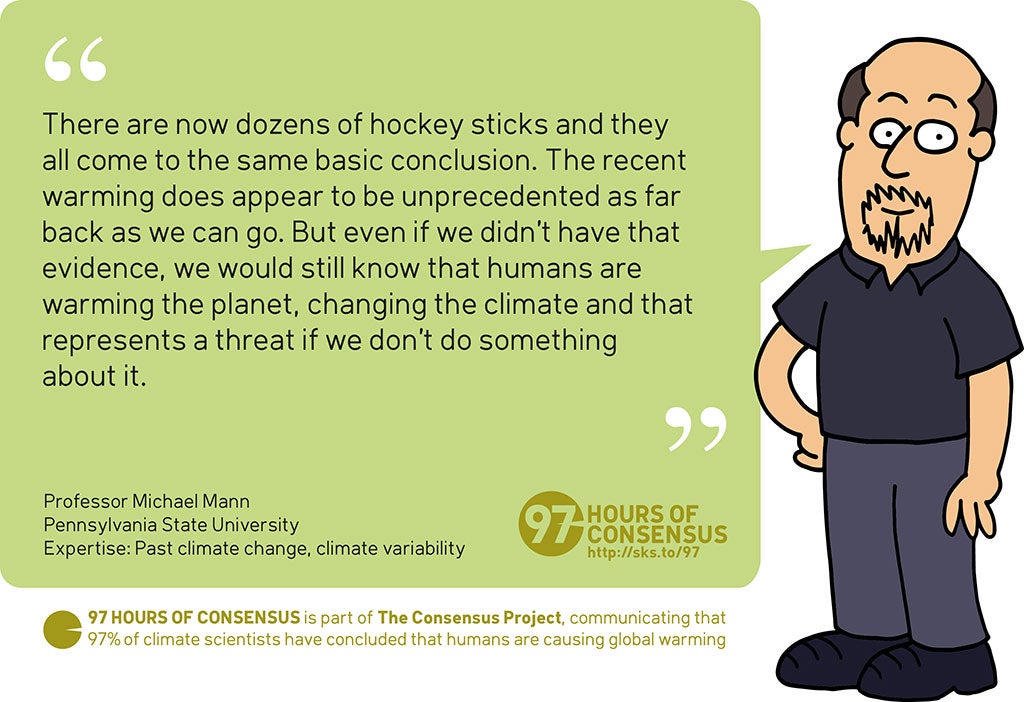 Skeptical Science explains the consensus among scientists and the rationale for choosing 97 scientists for its project:

In the scientific field of climate studies – which is informed by many different disciplines – the consensus is demonstrated by the number of scientists who have stopped arguing about what is causing climate change – and that’s nearly all of them. A survey of 928 peer-reviewed abstracts on the subject ‘global climate change’ published between 1993 and 2003 shows that not a single paper rejected the consensus position that global warming is man caused (Oreskes 2004).

A follow-up study by the Skeptical Science team of over 12,000 peer-reviewed abstracts on the subjects of ‘global warming’ and ‘global climate change’ published between 1991 and 2011 found that of the papers taking a position on the cause of global warming, over 97% agreed that humans are causing it (Cook 2013). The scientific authors of the papers were also contacted and asked to rate their own papers, and again over 97% whose papers took a position on the cause said humans are causing global warming.

Several studies have confirmed that “…the debate on the authenticity of global warming and the role played by human activity is largely nonexistent among those who understand the nuances and scientific basis of long-term climate processes”. (Doran 2009). In other words, more than 97% of scientists working in the disciplines contributing to studies of our climate, accept that climate change is almost certainly being caused by human activities.

We should also consider official scientific bodies and what they think about climate change. There are no national or major scientific institutions anywhere in the world that dispute the theory of anthropogenic climate change. Not one.

In the field of climate science, the consensus is unequivocal: human activities are causing climate change.

While it is distressing that such efforts are still necessary, it is refreshing to see a new take on how to demonstrate that those who deny human responsibility for climate change are not supported by the vast majority of the scientific community. This is especially timely in the lead up to the UN Climate Summit in New York later this month.